Staff member
When I ordered our new truck, I also selected the GM option for four trailer TPMS sensors. Knowing almost nothing about valve stems and TPMS sensors, I thought the GM supplied kit would work for the new trailer. I did some reading, made a couple phone calls and discovered the rims on our H rated trailer tires have the large .625" valve stem holes.

Doing more research, I found two companies that make .625" metal valve stems. The hope was I could use the GM supplied sensors with the new .625" valve stems.

This independent shop makes .625" valve stems that he said would adapt to the GM sensors. However, at $38/each I decided not to go this route. Because the Dill adapters were about $10/each.

My friend, who owns a shop, ordered four .625" valve stems from Dill, which he was told would work with the GM supplied sensors. We got the .625" Dill valve stems and quickly discovered they won't work with the GM sensors, as there are two different styles. So I ended up buying four new dual frequency sensors he had in stock.

The Dill stem and new sensor solution ended up being more expensive it would have been to order the Nichols valve stems.

In the end, I should have just ordered the Nichols valve stems, but erroneously we were told the Dill stems would work. Comparison of the two different styles

Always something man. At least you found ones to work.
S

So you got the aftermarket sensors to read both pressure and temp okay? I've got some stems and a sensor on order to try it.

scottn2retro said:
So you got the aftermarket sensors to read both pressure and temp okay? I've got some stems and a sensor on order to try it.
Click to expand...

We are going to try one of these and see how it works (supposed to go up to about 130 psi). If it doesn't work, I'll try one of the ones you got (I only inflate my load range G's up to 100 psi). I've heard some possible issues with range. Does anybody know where on the truck the receiver is located? I did a test and I could only pick up the OEM sensors when they were about 20' from the rear axles and not the axle further away than than. 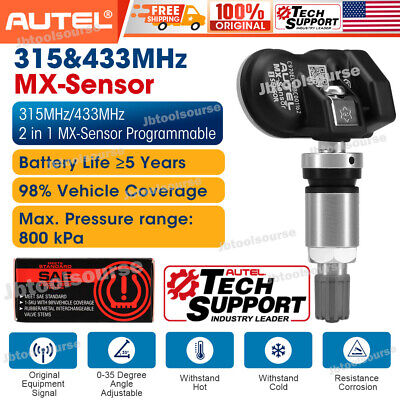 The 1-Sensor body weighs only 13g, making it significantly lighter than most sensors in the market, which ensures better sensor stability and performance. 315MHZ & 433MHZ 2in1. Installing TPMS sensors has never been so easy.
www.ebay.com
Last edited: Jul 19, 2022

scottn2retro said:
Does anybody know where on the truck the receiver is located? I did a test and I could only pick up the OEM sensors when they were about 20' from the rear axles and not the axle further away than than.
Click to expand...

I have read that their is a receiver near the rear bumper, but I see no evidence of that. My sensors will drop out on occasion. I wonder if there is a repeater for standard dual band TPMS sensors?
S

Apparently the receiver is under the rear license plate, but a lot of people experience range issues. So what would options for increasing range be:
- find a repeater that works with our receiver
- put a larger antenna on the receiver box
- move the receiver to a lower location with better line of sight to the tires
- fabricate an extension cable and mount the receiver on the trailer I have a tri-axle 5th wheel toy hauler I installed the correct tpms sensors in. going down the road it looses signal sometimes to the rear or center axle wheels. Upon questioning my dealer I was told they only have a range of 23 feet from the back bumper of my truck. 23 feet reaches the front of ...

Staff member
Thread starter
I have looked for repeaters, but can't find any that work with the GM system.
S

Now, did you activate those U-Pro sensors or did the tire shop do it? I have an activation tool that works for the OEM sensors, but would not activate the Autel (and apparently the Autel tool is like $200).